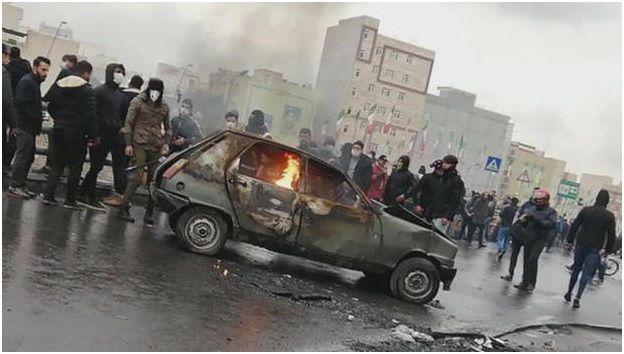 Iran is suddenly seeing its largest protests in years, in over 100 cities — and the government’s cracking down hard. Amnesty International reports more than 100 deaths, while exile groups put   the figure above 200; official media admit to more than 1,000 arrests. In a bid to stifle further demonstrations, the regime has imposed a nationwide Internet blackout and banned reporters    from covering the protests.

The anger broke out Friday after Tehran announced fuel rationing and a price increase of 50 percent. But protesters are now chanting, “Death to Rouhani” and “Death to Khamenei” — denouncing Iran’s president and its actual supreme leader — as well as “Death to the dictator.”

Government snipers have shot into the crowds from rooftops and even a helicopter, Amnesty reports, adding to “a harrowing pattern of unlawful killings by Iranian security forces, which have used excessive and lethal force to crush largely peaceful protests.” Ayatollah Ali Khamenei, the supreme leader, calls the protesters “thugs” and “rioters” trying to destabilize the country at the behest of foreign influences.

Funny: Iraq and Lebanon are weeks into mass protests aimed at Iran’s malign influence in those nations. Proving the protesters’ point, Tehran actually dispatched top security officials to counsel leaders in Beirut and Baghdad on how to crush those demonstrations. But now those experts have had to rush home to direct a domestic bloodbath. This wave of popular revolt may well fail — but it sure helps clarify just who is now responsible for the worst repression across the Middle East.

Iran: Conviction of Former Iranian Official over Involvement in 1988 Prison...