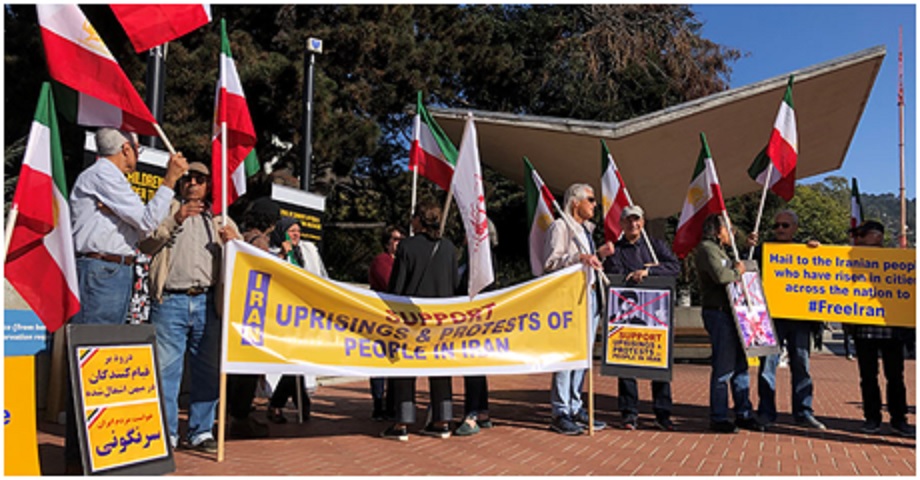 The Iranian American Community of Northern California, or IACNorCal, gathered on UC Berkeley’s campus Friday to advocate for the millions of Iranians currently experiencing an unexpected internet shutdown by their government.

The association supports the idea that Iran should be “a democratic secular republic” and believes it should take advantage of the United States’ freedom of speech to be the voice of the people of Iran, according to the IACNorCal website. IACNorCal spokesperson Hamid Azimi said at the protest that Iran’s recent uprising was sparked about a week ago when the price of gasoline was “tripled” by the Iranian government.

“A nation that has been under a religious dictatorship for the last 40 years has now risen up to resist and ask for change,” Azimi said at the protest.

According to the association’s website, the uprising has spread to more than 150 cities in Iran. In a matter of days, about 251 people have been killed, 3,700 injured and 7,000 arrested.

In response to those who have died in the uprising, president-elect of the National Council of Resistance of Iran Maryam Rajavi urged all compatriots on her Twitter account to commemorate the deaths and provide care and treatment to the wounded Iranians.

Rajavi has previously elaborated on a “Ten point platform” which offers a vision for a future Iran, according to the IACNorCal website. The plan has 10 steps, which include the aim to achieve complete gender equality, the abolition of the death penalty and a nuclear-free Iran, among other goals.

According to IACNorCal member Peymaneh Shafi, Rajavi’s 10 point plan calls for basic human rights and is “very progressive for a constitution.”

Shafi said she agrees with Rajavi’s plan because it demonstrates opposition to the current government and will set a good foundation for a future democratic Iran.

“I want (Iranians) to live in a peaceful society with its neighbors and be able to bring the Iranian people economic stability and grant a prosperous society,” Shafi said at the protest.

Campus freshman and IACNorCal member Seena Saiedian expressed his concerns regarding Iran’s recent major internet blackout. He added that he will not have information about the condition of his family in Iran until the communication in the country is restored and that this blackout seems to show the government’s “weakness.”

Campus graduate student Aydin Golabi, who also has family in Iran, said the inability to reach his family is “a gross violation of human rights.”

According to Azimi, the rally is pushing to ensure that international organizations, such as the United Nations Security Council, take measurable actions to condemn the suppression in Iran and demand the release of the detainees.

“We are confident that, with the uprising of people in Iran, now is the time that achieving the goal of democratic change in Iran is very realistic,” Azimi said at the protest.