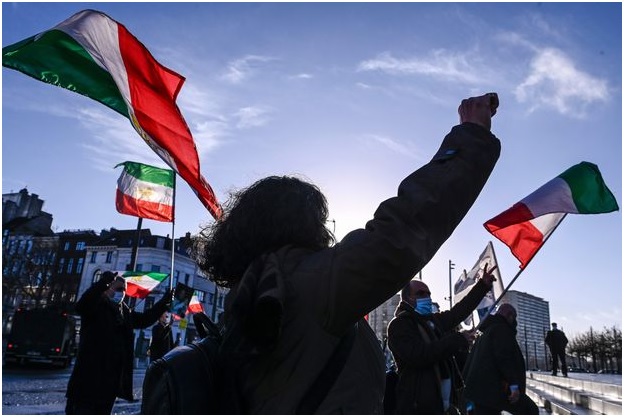 A Belgian court sentenced an Iranian diplomat to 20 years in prison for plotting a bomb attack against a gathering of Iranian dissidents outside Paris in 2018, in a case that has strained Tehran’s ties with Europe.

Assadollah Assadi, a counselor at Iran’s embassy in Vienna, was Thursday convicted of organizing the foiled attack that targeted a rally held by the National Council of Resistance of Iran, an umbrella opposition group dominated by the People’s Mujahedeen Organization of Iran, or MEK.

The court in Antwerp sentenced three other Iranians to 15, 17 and 18 years respectively in prison for collusion, concluding that Iranian state intelligence had ordered the plot.

“The attack plan was conceived in the name of Iran and under its leadership,” the Belgian state security service VSSE said to the public prosecutor last year.

Mr. Assadi, in prison in Antwerp since 2018, claimed protection by diplomatic immunity and refused to appear at the court hearings. The three others maintained their innocence.

Mr. Assadi’s lawyer said before the verdict that he would appeal a guilty sentence.

A spokesman for Iran’s Foreign Ministry condemned the verdict, saying that Iran didn’t recognize it and that all stages of the judicial process were illegal and violated international law.

The MEK heralded the verdict as a victory against the Islamic Republic, whose leadership it has worked for nearly 40 years to overthrow.

The group’s leader Maryam Rajavi said the trial had “confirmed the regime’s widespread planning for espionage and terrorism in Europe.” She called on the European Union to recall ambassadors from Tehran and close down Iranian embassies.

The case shows Iran’s willingness to conduct operations and exert political influence in Europe, which has helped keep alive the 2015 nuclear deal and provides a key link for Iran to the West. The verdict marks the first time an Iranian diplomat has been sentenced in Europe for terrorism activities.

The foiled plot strained Iran’s ties with Europe as both sides worked to salvage the nuclear deal, which former President Trump withdrew from in 2018. In retaliation to the terror plot, France and the EU froze assets of Iran’s intelligence agency, Mr. Assadi and another agent.

European officials are now concerned that Iran will retaliate by executing Ahmedreza Djalali, a Swedish-Iranian scientist working in Brussels, who has been sentenced to death for alleged espionage in Iran.

Ahead of the verdict, Iran worked behind the scenes to exchange Mr. Assadi for Mr. Djalali, the officials said.

Iran sees the MEK as a terrorist organization and accuses the group of fomenting public uprisings inside the country, including in late 2017, months before the Paris gathering. The U.S. considered the MEK a terrorist group until 2012, when the Obama administration delisted it after a lawsuit from the group that was backed by its American supporters.

According to the prosecutor, Mr. Assadi, an operative of Iran’s Ministry of Intelligence, on June 28, 2018, delivered a detonator and a pound of explosive, transferred from Iran in a diplomatic pouch, to an Iranian couple in Luxembourg.

The couple, Nasimeh Naami and Amir Saadouni, who lived in Antwerp, were arrested two days later en route to Villepinte outside Paris, where the MEK gathering took place. A fourth suspect, Mehrdad Arefani, an alleged Iranian mole in the MEK, was arrested at the site. Mr. Assadi was arrested on July 1 at a reststop in Germany, and extradited to Belgium.

European countries have in recent years blamed Iran for other suspected plots against dissidents, including two killings in the Netherlands in 2015 and 2017, and a foiled assassination in Denmark in 2018. Albania in 2019 said it had averted several planned attacks by Iranian agents against the MEK, which runs a large camp in the Balkan nation.

A spokesman for Iran’s mission to the United Nations didn’t reply this week to requests for comment on Mr. Assadi’s trial. Iran has denied involvement in the plots in Europe. Mr. Zarif has accused European nations of “harboring terrorists.”

Mr. Assadi’s case shows how Iran uses its presence in Europe and the continent’s open borders for intelligence work, particularly through cultural and religious institutions.

His notebook, submitted as evidence, suggested that the diplomat visited locations in 11 different European countries, including Shiite mosques and institutes in Germany, Austria, the Netherlands and France. His visits notably included the Islamic Center Hamburg, a hub for pro-Iranian activities in Europe, supervised by a foundation set up by Supreme Leader Ali Khamenei.

The German Ministry of Interior has called the Hamburg mosque “one of the most active centers of Iranian propaganda in Europe” whose actual task is “the subtle propagation of an Islamic theocratic state after Iranian example.”

“Iran uses cultural networks for intelligence purposes,” said Mehdi Khalaji, a senior fellow at the Washington Institute who studied for 14 years at seminaries in Iran’s holy city of Qom. “They want to have a foothold in Europe.”

Norwegian intelligence in November asked the country’s Ministry of Justice to consider expelling a cleric at the Iran-backed Imam Ali Center in Oslo who threatened national security, according to state broadcaster NRK.

British authorities last year investigated the Islamic Centre of England, a charity run by a representative of Mr. Khamenei, after it hosted a vigil attended by 2,000 people for Iranian Gen. Qassem Soleimani who had been killed by the U.S.