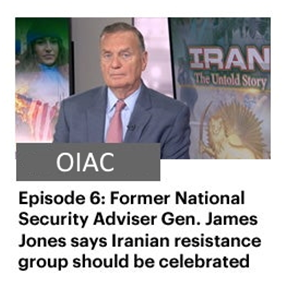 By the early 1980s, the MEK was organizing massive rallies to protest the growing dictatorship in Iran.

But with arrests and attacks of supporters mounting, in July 1981 the MEK moved to safety in Paris.

The Iran-Iraq War was raging, and the NCRI proposed a peace plan that picked up international support.

But by 1986, Tehran pressured the French government to expel the NCRI and MEK. Rajavi and his supporters were forced to move to Iraq, a war zone.

In northeast Iraq, the MEK turned an arid piece of land into a thriving community, called Camp Ashraf.

And they formed the mechanized National Liberation Army of Iran, conducting military raids into Iran.

Once the US invaded Iraq in 2003, the MEK  disarmed voluntarily …and Tehran gained a toehold in Iraq.

Camp Ashraf was attacked, repeatedly by the pro-Tehran Iraqi government, killing more than 140 MEK members, and wounding more than 1,300 between 2009 and 2016.

The attacks convinced members of Congress to issue six bipartisan resolutions to protect the MEK as “protected persons.” And the National Defense Authorization Act of 2015 called for the protection of MEK members in Iraq

“THE US GOVERNMENT AND MILITARY MADE A COMMITMENT TO PROTECT THOUSANDS OF PEOPLE WHO SURRENDERED THEIR WEAPONS AND CAME UNDER OUR PROTECTION AS A RESULT. CLEARLY THIS COMMMITMENT HAS NOT BEEN SUSTAINED.”

“THE DETERIORATING SECURITY SITUATION IN IRAQ ONLY HIGHLIGHTS THE URGENT NEED TO FIND SAFE REFUGE FOR THESE INDIVIDUALS OUTSIDE THAT COUNTRY.”

By 2016, the residents were safely resettled to Albania with the help of the United States and the United Nations.

“THIS IS A MAJOR HUMANITARIAN ACHEIVEMENT. I’M VERY PROUD THAT THE UNITED STATES WAS ABLE TO PLAY A PIVOTAL ROLE IN HELPING TO GET THIS JOB DONE.”

SEXTON: We’re now joined by soldier and patriot, General James Jones. General Jones is the former Commandant of the Marine Corps, former Supreme Allied Commander of Europe, and former Special Envoy for Middle East Security. He also served with distinction as National Security Advisor to President Obama. General Jones, thank you so much for being here. Appreciate it.

SEXTON: So, tell me, you’ve been an outspoken supporter of the MEK for many years. Why is that?

JONES: I haven’t been alone in this. There’s about 60 or 70 outspoken former national figures including attorneys general, chairman of the Joint Chiefs, members of the Joint Chiefs, ambassadors, politicians on both sides of the aisle. And the reason for the support is that in 2003, when the Iraq War started, we found a camp called Camp Ashraf which was hosting about 4,000 families of the so-called MEK. And this organization was in opposition to the Iranian regime. And we interviewed every one of these people. We gave them safe passage individual ID cards in return for their disarming. We assigned some great officers there to be the liaison officer to this group. They provided many, many valuable bits of intelligence on Iran’s nuclear program to us and helped us immeasurably. And then when we pulled out of Iraq during the Obama administration, we thought we had a deal with the Iraqi government that they would also protect these people in turn. But what they did do is participate in the almost systematic extermination of these people along with Iran. So =

SEXTON: Why would the Iraqi government do that?

JONES: Well, I think the Maliki regime frankly was more of an Iranian—more populated with Iranian sympathizers. They certainly weren’t thanking us for anything we did. And with regard to this particular group of almost 4,000 people, they conducted overt raids, military raids, and attacked them and killed hundreds of them over a few years.

SEXTON: Did we fail to live up to our obligations to help protect these dissidents in Camp Ashraf?

JONES:  the group that I’m with and that have been arguing this case and actually successfully in U.S. courts, the Court of Appeals directed the State Department to show cause as to why they should be listed as a terrorist organization when clearly they weren’t. And eventually won that fight. But and the people were relocated from Camp Ashraf to Camp Liberty with the idea being that they were going to be soon taken to another country. Well, that took several years and several more attempts to eradicate these brave people. And so, a lot of us have rallied to their cause. It’s really now known as the National Council of Resistance of Iran, NCRI, which is a coalition of the MEK but other opposition groups. And they have a democratically elected leader by the name of Mrs. Maryam Rajavi. And they have a 10-point plan for what the government of Iran is going to look like after the regime falls. And we hope that that happens in the near future.

SEXTON: What can you tell us about the vision the NCRI, as you’ve said, their vision for Iran. What are the broad strokes of the 10-point plan?

JONES: Well, sure, the broad strokes are absolutely Jeffersonian and democratic. One is universal suffrage, freedom of assembly, rule of law and justice, separation of church and state, gender equality, human rights, market economy and the right to own private property, foreign policy that’s based on peaceful coexistence, and a non-nuclear future for Iran. Non-nuclear weapons. And we have met, and those that I’ve associated with since I left office—I actually had never heard about this group until after I left the White House in 2010. And I quite by accident stumbled upon former colleagues of mine who were supporting this group. And I tried to find out a little bit more about them. And the more I found out about the more concerned I was. And then in April of 2011, I was called in New York, I was in a hotel in New York, and I was called from a cell phone at Camp Ashraf, and I could hear the shots being fired in the background. And uniformed Iraqi soldiers had essentially attacked and were killing women and children. And there are videotapes of this. So, I have them in my possession. So, it is a democratic organization. There are people who will not give up on this idea that it’s a semi-terrorist organization. It’s not. Ambassador Lincoln Bloomfield wrote this report on the MEK called Shackled by a Twisted History. And this is to me the seminal document that basically talks about what these people are and what they aren’t. They’re alive and well today thanks to my colleagues and others who argued persuasively to get them out of Iraq before they were all exterminated. And they’re living peacefully in Albanian, doing quite well. But even there, the long reach of Iran has tried to persecute them.

SEXTON: Why does the Iranian regime have this fixation? Is it just purely a function of their efficacy as an anti-Iranian

JONES: This is the coalition that the regime fears the most. And it’s =

SEXTON: Why is that?

JONES: Simply because they’re effective. They’re well-connected in the country. They have a following in many countries around the world. They have annual gatherings. They have a very important support base here in the United States. But we have not, we have not gone the extra mile I think we need to celebrate someone like Mrs. Rajavi who is a wonderful human being. Her husband has been persecuted and has been in hiding for many years.

SEXTON: What should we do? Right now there is a discussion about the extent of U.S. involvement, I mean at the highest level at the presidential level, U.S. involvement in terms of dealing with Iran, how much pressure we should put on, should there be additional forces sent to the region as perhaps a signal somewhere that could be a harbinger of things to come. In terms of a group like the MEK how can we, how should we in your opinion help as Americans?

JONES: Well, first of all I think we have to understand that Iran is fundamentally unchanged regardless of what the previous administration tried to achieve. Iran is still one of the number one exporters of terrorism in the world. And they have not changed. So, I support the administration’s position on Iran. I think we should celebrate the NCRI and their existence. I think Mrs. Rajavi should be invited to visit Washington. We have all kinds of unsavory people who come here; this is one of the good people and we should invite her I think. And I think one of the colleagues who helped get the MEK out of Iraq was the current National Security Advisor, John Bolton, who knows this group very, very well and was one of the big supporters of them before he went back into government. So, I think we’re on the right track about identifying Iran for what it is. I do think that the NCRI organization has got a plan to say this is what we are going to do within the first six months after the regime falls, and the Iranian people are going to be much happier and much better off for it.

SEXTON:  And finally, has the Iranian regime harassed you or other prominent supporters of the NCRI?

JONES: I don’t know that they have recently. I know when I was in office they published a list of most wanted people in the American government, and when I was National Security Advisor I was one of them. So, that’s about =

SEXTON: That’s a yes, I think we’ll take that as a yes.

JONES: It’s a badge of honor.

SEXTON: All right, well General, thank you so much for your expertise in this. We appreciate it sir.