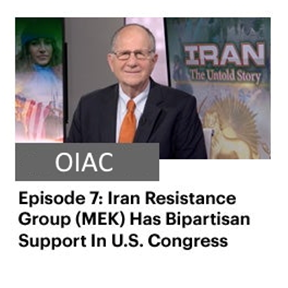 Buck SEXTON: Welcome to our series, Iran: The Untold Story, and our continuing look at the main Iranian opposition group. This week we examine how a bipartisan group of U.S. Senators and House members have supported the MEK and the NCRI for nearly four decades.

US political support for the MEK and National Council of Resistance of Iran runs deep and spans nearly four decades.

“… And move to a democratic regime where the people of Iran actually have a say, we have to be united. Thank you for bringing us all here to be united because together we can make that happen.”

And it’s always been bipartisan. The support dates back to the 1980s… when Senator Ted Kennedy and then-Congressman John McCain wrote letters on behalf of human rights for MEK dissidents, many locked in Iranian prisons.

By the 1990s, a bipartisan majority of members of the House and Senate declared that the NCRI “will contribute to the achievement of peace and stability…”

That continued support picked up steam in 2009… when hundreds of bipartisan co-sponsors demanded that the US protect MEK members living under near-constant attacks at Camp Ashraf in Iraq.

Later, Congressional delegations who successfully fought to delist the MEK, were able to directly engage with the NCRI and MEK at their bases in Paris and Albania.

One of the strongest supporters was Senator John McCain, who visited Albania with the NCRI President-elect Maryam Rajavi in 2017.

Congressional support from prominent Democrats and Republicans continues to this day:

Rep. Brad Sherman: “Your fight is our fight. And we stand with you as you face down a regime that cares nothing for your own people’s freedom or prosperity.”

Rep. Tom McClintock: “The Iranian regime is illegitimate and needs to be overthrown. And there are many Democrats who believe as Republicans believe that that is absolutely essential to the peace and security of the Middle East and the future of civilization”

SEXTON:  We’re joined now by a former member of Congress, Representative Ted Poe of Texas. Congressman Poe, great to have you here. We appreciate you joining us.

SEXTON:  So, in your experience, what level of support does the MEK have in the U.S. Congress?

POE: It’s interesting because the MEK and the resistance movement for years has been one or both chambers and in a bipartisan way have supported the MEK throughout the 40 years that they have been in existence, especially the last few years. And the support is very strong both in the House and both in the Senate by leading members of both parties in the Foreign Affairs Committee primarily. So, it’s been good. And it’s one of those issues where I hope it continues to be bipartisan in the future.

SEXTON:  Now, this has been a group that is controversial, was at one point listed as terrorist group, has been delisted as a terrorist group. Why do you and other members of Congress feel so strongly about supporting them to this day?

POE: It’s interesting because of this, they gave up their weapons as the United States demanded that they do, and they have continued to not only give the United States information about the regime that is taking place, the mullahs, what they’re doing and their nuclear activity, but these people, Iranians support the most important thing that we support in this country, which is freedom and human rights. And here we have a group of people that their government is at war with them and has been since 1979, 120,000 people in the resistance have been murdered by the regime over the last 40 years. And members of Congress still—and this is good—believe in helping people who believe in freedom and support freedom. And that’s all that these people wants. It’s a human rights issue. And I think we should continue to support them. Like President Kennedy said a long time ago, that we will support anybody who will pursue freedom. And that’s what they’re doing and that’s why members of Congress support them, because they have been oppressed by their own government. Their government has been at war with them. And we hope that the resistance is able to become now leaders of the Iranian people, the Iranian government.

SEXTON:  In Iraq, the MEK camps, Ashraf and Liberty, they came under repeated attacks by pro-Iranian militias, the Iraqi government. Over 140 MEK members were killed. What did the United States Congress do in reaction to this?

POE: There were numerous resolutions presented, bipartisan of course, bicameral, supporting the people of Camp Ashraf. And calling out the killers. There were 140 killed Iraqi militias that were supported by Iran. And they invaded these camps that were defenseless that we were supposed to be protecting with the U.S. military. And not one of those killers has been brought to justice by any government. And so, members of Congress, once again in a bipartisan way, wanted to make sure that these people who’s seeking freedom and liberty were protected and made sure that there were some people held accountable. No one has ever been held accountable and we have I think strong support of those people who are Iranians who just want to go back home and have a free democracy.

SEXTON:  When the MEK was still in Iraq, you joined a Congressional delegation to go visit them. Is it true that the Iraqi prime minster at the time blocked your visit?

SEXTON:  Why would he do that?

POE: [laughs] We went to see Maliki and find out many things about what was taking place in Iraq, the U.S. support for the government. And we asked him and told him we wanted to go to Camp Ashraf and see some of the problems that were going there, including the visit with people who had been attacked by the militias that had attacked the camp. And he got indignant. I was really surprised how indignant he was. He said, “You are not going to Camp Ashraf.” Refused to allow us to go. And eventually because we persisted on wanting to see the people in the camps, ordered us out of Iraq. Told us, “you have to leave my country. You cannot be here.” Very indignant, quite loud when he made that statement. Of course we didn’t leave until we were ready to leave. But the reason he did it was because he didn’t want us to see the truth. He didn’t want us to see what the consequences were of the attacks on this camp of several thousand people, Iranians who were in Iraq, supposed to be protected by the Iraqi government and the United States. And I think he was just being a puppet of the mullahs in Iran and preventing Americans to go see the camp that we supported.

SEXTON:  In 2015, as the chair of the House Foreign Affairs Subcommittee on Terrorism and Nonproliferation, you invited Maryam Rajavi to testify as a witness. Why?

POE: She is the President-in-exile, as I call her, for the MEK. And wanted to hear from her firsthand the history of the MEK and what the plan was for when the government finally becomes under the control of the citizens. And so we invited her to testify. We had great resistance from people who did not want her to testify, including the State Department, which the State Department has always been on the wrong side of this issue of helping and protecting the MEK. Anyway, we did. And she testified by satellite for a long time and told us about the members of Congress. And this was a bipartisan request, the members of Congress, to have her testify by satellite. And she enlightened us on the plan for the country being taken by the resistance and the people of Iran. And she gave us a ten-point plan which is very good, which is about as democratic as Jefferson would like it to be, talking about the basic human rights that the new plan, ten-point plan would present. So, she presented all that and made awareness to American people about what has taken place to a group of wonderful people across the land.

SEXTON:  What do you say to critics of the NCRI who claim that it’s just not a legitimate and capable alternative to the Iranian regime?

POE:  Well, those critics really don’t know what they’re talking about. Because it is. This group of people have been wanting to have the people in control of Iran. We have a government in Iran that is at war not only with Iranian people in Iran, but a war with exiles across the world, and at war with the world. The Iranian government is the state sponsor, number one state sponsor of terror in the world. And they are causing terror not only in their own country but in other countries: in Iraq, in Lebanon, in Syria, in Yemen and others because of the organizations that work with them. And that government must eventually fail because they are at war with us. They claim they want to, you know, death to the United States, death to Israel. I think the Ayatollah means it. So that is their plan. The people, the MEK and this group of people have an alternative. They have a free alternative. And they are in exile of their own country. So, I think they can totally support their government, a new government, and have free elections and let the people choose who rules over them. And have a secular government, not one that is a religious organization that is wanting to kill anyone who disagrees with them. So, they are quite capable of being the resistance. And I’m glad they exist. They’ve been fighting for a long time. They’ve been in exile a long time. And I think they’re quite capable.

SEXTON:  Congressman Poe, thank you so much for joining us today. We appreciate it.

POE: Thank you. Thank you, Buck.

SEXTON:  Next week on Iran: The Untold Story we examine the MEK’s growing international support. I hope you’ll join us.