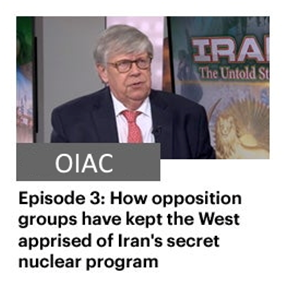 In 2015, with great fanfare, President Barack Obama announced the signature diplomatic achievement of his presidency: “Because of this deal, the international community will be able to verify that the Islamic Republic of Iran will not develop a nuclear weapon.”

President Trump: “The fact is this was a horrible, one-sided deal that should have never, ever been made. It didn’t bring calm, it didn’t bring peace, and it never will.”

Critics of the deal argued that, with its newfound billions, Iran’s hardline regime had expanded its military budget, built nuclear-capable missiles, and continued to fund terrorism.

Obtaining that kind of detailed secret intelligence on Iran—from behind the Curtain—has become a hallmark of the Iranian resistance.

Indeed, at this August 2002 press conference, the National Council of Resistance of Iran revealed that Iran had built nuclear-related facilities hidden from international inspectors.

Alireza Jafarzadeh, Middle East expert, author, public speaker, and TV commentator: “Many nuclear programs are at work without any knowledge of International Atomic Energy Agency. They had succeeded to keep it secret until today.”

General James Jones: “Today, as was the case in 2010 when I left my post as national security advisor, the Iranian regime remains mankind’s most existential threat to peace and stability. Of this I am certain. That day will come soon when all Iranians will be set free, when all who are forced to flee their homeland to avoid persecution will lead a great parade in Tehran to celebrate the triumphant return of a great people to their rightful position among the family of nations.

BUCK SEXTON:  We are joined now by Dr. Olli Heinonen, a non-proliferation expert and former Deputy Director at the International Atomic Energy Agency.  Dr. Heinonen, thank you so much for being here.

HEINONEN: Thanks for having me.

BUCK SEXTON:  So, first, as an expert on nuclear programs around the world, what can you tell us?  What should we know about Iran’s nuclear ambitions?

HEINONEN:  I think that Iran justifies its nuclear program by civilian purpose.  But at the same time, they have back in their mind, if their security situation changes, they maintain the sensitive technologies like uranium enrichment, so they are in a position, in a fairly short period of time to weaponize their nuclear program if they so decide.

BUCK SEXTON:  Is there any doubt in your mind that Iran was building nuclear weapons?

HEINONEN:  Iran had a very ambitious program to build nuclear weapons as this archives with Israel recovered last January from Tehran show, and I came to this conclusion already in 2015 where it’s said that Iran had some [0:04:14] feasibility studies in nuclear weapons, but this archive showed that it was much more ambitious [0:04:22].

BUCK SEXTON:  You spoke about the Israeli archives and what they were able to obtain.  Can you just walk us through a little bit of what did those Israeli archives of the Iranian nuclear program show us?  What were some of the specifics and some of the red flags that people should be aware of?

HEINONEN:  I think at the most there are two questions here.  First is that why do they maintain?  Why you maintain such detailed information about the design of nuclear weapon.  The second thing is then you look at the information itself.  There was a cohesive plan.  So, when this program was stopped in 2002, they had a plan to have by 2004, 2005, five nuclear weapons manufactured, one ready for testing.  They had a plan to build a nuclear test site, and they proceeded already with the [0:05:05] experiments.  They were building factories or facilities actually to produce nuclear warheads.   So, this was a serious program.  It was not a feasibility study anymore.  They had passed that threshold in my view.

BUCK SEXTON:  When was the last time that international inspectors were in Iran?

HEINONEN:  Actually, they are there every day.  They are visiting [0:05:30] and other places, monitoring activities there, and try to make sure that Iran doesn’t proceed its weapons program.

BUCK SEXTON:  Now, the Trump administration has pulled out of the Joint Comprehensive Plan Of Action, the JCPOA.  What has been the result of that to date?

HEINONEN: So, far not much in terms of the events on ground.  IA continues its normal work.  So, the Iranian government has hardships, because of sanctions imposed, etcetera, so I think that the Deputy Foreign Minister Araqchi put it very nicely, that this JCPOA is now in life support.  We don’t know how it is going to be implement.  Iran is getting slightly nervous by starting to threaten that if the other parties don’t fulfill their obligations, we might want to increase our uranium [0:06:24] capability, which that means if you look at from the point of nuclear weaponization, they are climbing up on the ladder to be closer to be able to weaponize and build a weapon if they so decide.

BUCK SEXTON:  Has there been any change in the behavior or in the agreement and the follow-through on the agreement from the other members of the JCPOA or is America the only country that has really markedly shifted or changed its behavior?

HEINONEN:  Well, I think that the other parties, particularly France and UK, they are worried about certain aspects of Iranian nuclear program, and that’s why during last winter there were discussions between the parties that whether they could amend or change or fix some of the flaws of the JCPOA, but Iran didn’t agree to that, and that’s why we ended up with the situation that U.S. decided then to (boycott).

BUCK SEXTON:  Now, do you feel that the international community is safer or less safe in terms of the threat of Iran’s nuclear program today versus before the Trump administration pulled out the JCPOA?

HEINONEN:  That’s hard to say.  You know, I think that I look at more from the technical and process point of view.  And I would raise the question, “Is Iran now in a better position to build a nuclear weapon today than what it was, for example, 2015?”  And this comes down to the flaws of the agreement, because they have been permitted to continue development of more advanced centrifuges, more powerful centrifuges, which means that they are able to break out quicker if they so want.  Then, at the same time, we don’t know whether they have continued their work on the nuclear weapon design, as the papers from this archive show that they had perhaps an idea to that end.  And there has been no, in my view, effective monitoring of the military aspects of that program.  Have those really terminated or not?

BUCK SEXTON:  Yeah, I was going to ask how transparent is the Iranian nuclear program?  Or maybe a better question is how much visibility do we currently have, does the international community have?  You mentioned inspectors at the different sites, but are there areas that are still off limits?  Are there ways the Iranians could very easily be cheating and hiding important aspects of whatever they’re up to with their nuclear program?

HEINONEN:  You know, I would describe the nuclear weapons program like a tent with three poles.  One pole is the delivery vehicle, the missile, designed to deliver the nuclear warhead.  There’s no monitoring on that at all in the JCPOA or UN Security Council Resolution.  So, we don’t know what kind of progress Iran has done, what they have been working also with their [0:09:16], as example.  Then it’s the warhead itself, the nuclear explosive.  So, IA passed some access rights, but it seems to me that they have not very much exercised it since 2015.  So, there is another unknown area (Laguna) where we depend greatly on the intelligence information.  And then, it’s the third element where we might be a bit better off, and this is the monitoring of the actual declared facilities in Iran, and then the only drawback there is what if they have some undeclared nuclear material and activities which we have not been able to see yet?  And therefore, these archives are important thing to study and dive deeper in to find it out.

HEINONEN:   Yes, particularly in 2002 when they disclosed this Natanz [0:10:21] Iraq activities to the international community.  That was perhaps the high point of their sharing (all) information.  Then they have had a lot of announcements since then, some of them may be fairly accurate.  So, me of them perhaps not that, but this is always with the intelligence information.  You never get a full picture.  So, yes, it has been important and particularly now enriched at the months we have talk about this organization SPND, so they were bringing some aspects of that program to the public, particularly, I think in 2015.

BUCK SEXTON:  And what do we need to know about the separation between Iranian civilian and military nuclear production facilities?

HEINONEN:  Well, this was a traditional approach that you have civilian program and then parallel to that, you run a military program.  You compartmentalize it.  That’s most of the country’s state.  So, the civilian program mainly concentrates on building technologies, acquiring knowhow, producing nuclear material.  But then, for example, uranium enrichment and you’ll take centrifuges.  Actually, you can manufacture the same centrifuges, do R&D public, but then put them under this clandestine secret military installations and run them there to produce [0:11:50] nuclear weapons.  And this was the plan of Iran, as the archives show.  The Fordow, or as they call it, Al-Ghadir which actually supports the [0:12:02] military installation and not to be part of the public program. =

BUCK SEXTON:  So, what can the international community do to ensure that Iran ends its nuclear weapons program?  Is it even possible?

HEINONEN:  It is, but you needed [0:12:12] and the (party) is Iran, that Iran makes this tough decision and let’s clean the history.  Let’s put end to that.  Let’s destroy those documentation and equipment which are only for that purpose.  Perhaps they get a slap on the wrist, but then they can start new.  They can start from clean [0:12:33] South African in 1994.

BUCK SEXTON:  Dr. Heinonen, thank you so much for joining us and sharing your expertise.  We appreciate it.

HEINONEN:  Thank you very much.