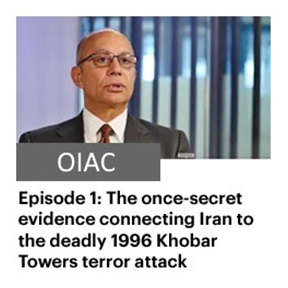 Welcome to Iran: The Untold Story. Here, we take a close look at Iran’s role in supporting international terrorism, its pursuit of nuclear weapons, its systematic massacring and imprisoning of political opponents, and the ongoing efforts of dissidents, including Iranian-American interest groups, to bring freedom, equality, and lasting change to Iran.

President Bill Clinton vows swift revenge. “We will not rest in our efforts to find who is responsible for this outrage, to pursue them and to punish them.”

One of the key on-scene investigators was FBI Agent Bassem Youssef.

Youssef says the FBI learned quickly who was to blame.
Youssef: “I would say Iran’s fingerprints were all over this attack, this terrorist attack. And it didn’t take too long for us to come up with that, with that conclusion.”

The investigators were aided, in part, by detailed intelligence made public by the main Iranian opposition group, the National Council of Resistance of Iran.

Youssef: “It became very clear in a very short period of time that political considerations trumped the investigation.”

While Clinton publicly blamed Saudi-based militants, he sent this secret cable to Iran stating that the US had “credible evidence” that Iran and local terrorists were “directly involved” in the attack.

Louis Freeh, FBI director in ’96, was frustrated Iran was not held accountable.

Years later, at a speech in D.C., he called out the Clinton Administration for putting politics first.

Youssef: “They did not want to confront the fact and the reality that the Iranian government had murdered 19 Americans and blown up Khobar Towers.”

In April 2019, the Trump Administration officially listed the IRGC—the Iranian military group behind the Khobar attack–as a foreign terrorist organization.

Secretary of State Mike Pompeo: “I am announcing our intent to designate the Islamic Revolutionary Guard Corps, including its Qods Force, as a foreign terrorist organization in accordance with Section 219 of the Immigration and Nationality Act. Last September, a federal court in the United States found Iran and the IRGC responsible for the 1996 Khobar Towers bombing which killed 19 American service members. For 40 years, the Islamic Republic’s Revolutionary Guard Corps has actively engaged in terrorism and created, supported, and directed other terrorist groups. This historic step will deprive the world’s leading state sponsor of terror the financial means to spread misery and death around the world.”

BUCK SEXTON: And we’re joined now by the former FBI agent you saw in that piece, Bassem Youssef.  Thank you so much for joining us, Bassem.  Good to see you.

BUCK SEXTON: So, as lead investigator in the Khobar Towers attack, how strong was the evidence that the Iranians were the ones that were responsible?

YOUSSEF: Well, it really didn’t take much time.  I would say within the first three or four months of arriving in Saudi Arabia in 1996 with cooperation with the Saudis and other governments, it was very clear that from the get-go, Iran’s fingerprints were all over this attack.

BUCK SEXTON: And why didn’t President Clinton more aggressively pursue Iran then for its complicity or its direction of this attack?

YOUSSEF: You know, if you recall back in that—at that time [0:04:38] that the President had promised that we would, meaning the U.S. would retaliate militarily against any country that sponsored this act of terror.  For some reason or another, when that was the result of the investigation, I believe the President just had other political reasons for not wanting to pursue that, that result.

BUCK SEXTON: And how frustrating was the situation for you as the FBI’s legal attaché on the ground in Saudi Arabia?

YOUSSEF: Well, the entire FBI, and I believe the entire intelligence community and many, many agents who worked tireless long hours to actually work this investigation to come up with the result that we came up with which was Iran’s involvement, to see that that gets relegated to the sidelines or ignored was extremely frustrating and very upsetting to a lot of agents who have worked this case.

BUCK SEXTON: Were the Saudis reliable partners in that process?  Did they seem as motivated as you and your FBI colleagues were to get to the bottom of this?

YOUSSEF: The Saudi mabahith and the GID, the General Intelligence Directorate, sort of the equivalent of the FBI and CIA, cooperated fully.  We had great relations with them, and I say that they cooperated as good as can be.

BUCK SEXTON: And in terms of the actual forensics involved in investigation, the details that you had to pull together, was this something that, you know, were there some early hurdles in that process that you were able to- were there some, you know, breakthrough moments that you saw?  I mean at what point did you realize, “Wow, okay, we now have the hard evidence we need to know that the Iranian government’s hand was all over this.”

YOUSSEF: Sure.  So, obviously, when we started this investigation, even before working the liaison aspect of it with the Saudi counterparts, we had a team, again, of dedicated agents who worked to sift through the sand in Iran to look for evidence, for example, one of the most important pieces was a partial VIN of the Mercedes Benz truck that was used in the explosion.  That was an important piece.  And as we tracked that to see where it came from, it did come from Iran, and so that’s just one tidbit of many other pieces of intelligence and evidence that we found that points to Iran.

BUCK SEXTON: What was the motivation for the Iranians, in terms of their involvement in this specific attack?  We know the Iranian government hates America, hates Israel, hates the West, but was this in specific retaliation for something?  Did we ever get a sense as to why they would go—why would the Iranians go after Americans in Saudi Arabia?

YOUSSEF: I would imagine maybe just, I mean we don’t have any specific answer to that meaning.  We never really talked to any Iranian official to tell us what their reason or motivation behind it is, but obviously, if this would be a way for them to get us, get the U.S. military out of Saudi Arabia as a buffer between Iran and Saudi Arabia that could have been one of the reasons.

BUCK SEXTON: And what role did the Iranian opposition groups play in terms of Khobar Towers?  And did they provide reliable information to the FBI?  Were they a part of getting accountability for the Iranian regime?

BUCK SEXTON: And tell me about the role that the Iranian Revolutionary Guard Corps, the IRGC, may have played in this attack.

YOUSSEF: The IRGC is basically known to be the military arm, the Iranian Revolutionary Guard Corps.  They are the ones who are behind just about virtually every attack, every terrorist attack that was sponsored by Iran.  That is their main job, basically, to sponsor these acts of terror.

BUCK SEXTON: And tell me about the Trump administration’s recent decision to designate the IRGC as a terrorist organization. Is this the right move?  And if it’s the right move, how could that help going forward to deter terrorist attacks by the Iranian state?

BUCK SEXTON: Now, do you think that we achieved some measure of justice after the investigation of the attack at Khobar Towers?  Have there been any consequences for the Iranian regime?

YOUSSEF: The Department of Justice was able to have indictments and conviction on the individuals who perpetrated this attack. I think there could be actually more in terms of maybe restitution.  I mean for example, the JASTA that was just approved recently, the Justice Against state Sponsors of Terrorism Act, that would allow for a civil litigation against countries that sponsor this act of terror.  As a matter of fact, just recently, in 2018, last year, there was an award, a monetary award ordered by a federal judge against Iran specifically for being complicit and actually assisting the terrorists to go through Iran without having their passports checked.  And I believe that award is over 10 billion dollars.

BUCK SEXTON: Do you think that the West and America, if there’s a willingness to hold Iran accountable for its support of terror and to be more aggressive in response to terrorist acts like the one that you investigate in the future, could that help not just deter Iranian aggression, but also bring about meaningful change in the Iranian state?

YOUSSEF: I would certainly hope that would be the case.  If they—if the Iranian government senses enough pressure, not just from the U.S., but from the world at large, that they may at least be more careful in what they do and maybe curb some of the terrorist attacks that they would try to perpetrate in the future.

BUCK SEXTON: Bassem Youssef, thank you so much for joining us.  We appreciate it.