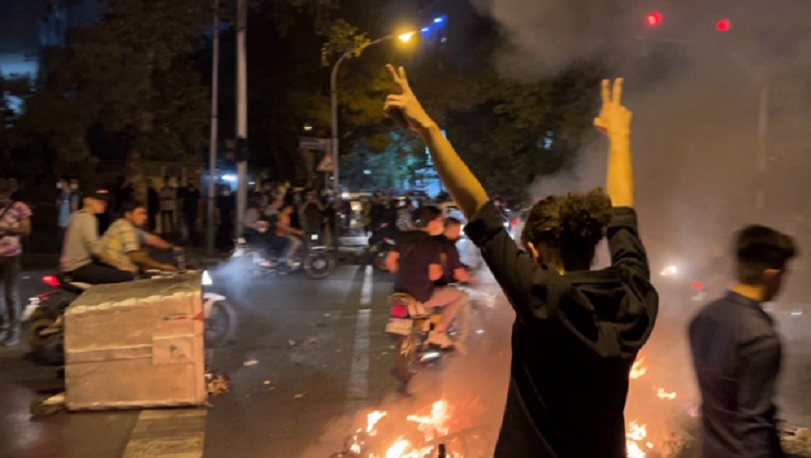 The preamble to the United Nations’ Universal Declaration of Human Rights states that in absence of the rule of law, individuals and societies are “compelled to have recourse, as a last resort, to rebellion against tyranny and oppression.” That is precisely what we are currently witnessing in Iran, and in line with the UN’s declaration, the people’s uprising must be recognized as legitimate and as deserving international support.

To their credit, major world powers have appropriately condemned the Iranian regime’s backlash against the ongoing protests, which began in response to the death, on Sept. 16, of 22-year-old Mahsa Amini at the hands of Iran’s “morality police.” Some governments have even taken steps to sanction Iranian authorities over the killings and mass arrests that were reported during the first two weeks of unrest.

However, these measures have been unfortunately tepid, tentative and slow to develop. They do not reflect the urgency of the moment. Although Iran underwent at least a half dozen other nationwide uprisings between December 2017 and earlier this year, many commentators have rightly observed that the present situation is different. While many of the slogans are the same, conveying a now-familiar message of regime change, the accompanying actions are more intense, far-reaching and defiant.

Apart from simply gathering in the streets and calling for “death to the dictator,” participants in the current uprising have been meeting security forces face-to-face, often fighting back against heavily armed officers using nothing other than rocks and fists. Videos have leaked out of the Islamic Republic in spite of harsh restrictions on internet access, which show police vehicles and government buildings having been set ablaze.

Meanwhile, the presence of female activists has been especially apparent in the current uprising, as might be expected in light of its origin as a protest against the regime’s forced veiling laws and its violent enforcement of fundamentalist Islamic standards of public behavior. Women have gathered in massive crowds to collectively throw off their hijabs, often burning them and cutting their hair to signal their permanent defiance of the regime’s demands.

This, along with unusually consistent international attention to the uprising, may have had a mitigating effect on the regime’s violent repression, at least over the short term. Tehran has tried to both conceal and justify that repression with its cuts to internet access and its corresponding promotion of narratives that portray domestic unrest as part of a vague, foreign conspiracy to undermine the theocratic system. But the sheer scale, geographic diversity, and spontaneity of the protests makes those narratives easy to debunk even in absence of complete information and reliable online communication.

The female population’s extraordinary outrage means that it will be necessary for authorities to target women if they have any hope of halting this outpouring of dissent. But this creates something of a conundrum for the regime, since it has long presented its forced veiling laws and general misogyny as part of a social strategy for protecting women. It is a narrative that is not taken seriously by many Iranians, but its absurdity would be laid bare like never before if the regime openly killed female activists while still claiming to act in their best interest.

This goes to show that Iranian authorities are being made to confront instability not only in society at large but also in the ideological underpinnings of the system. The regime will soon face the choice of either acknowledging its own hypocrisy in order to lean into the violent suppression of dissent, or else pursuing compromise with the activist population and thus acknowledging that their hardline Islamism was wrong-headed and unpopular in the first place. In either case, the theocratic dictatorship cannot be expected to survive the change, and so the international community should prepare itself for Iran’s complete transformation.

Some may question what that transformation will lead to and whether it will be beneficial to either Western interests or the Iranian people themselves. But many Western policymakers already understand that there is an established alternative to the clerical regime, and that its platform is and always has been to reject all forms of tyranny and to provide Iranians with popular sovereignty once and for all.

That alternative is embodied by the National Council of Resistance of Iran (NCRI) and its female leader Maryam Rajavi, who has outlined a 10-point plan for Iran’s free, democratic future. That plan has long been endorsed by American and European lawmakers representing a broad range of political ideologies and affiliations, including 257 bi-partisan members of Congress in the U.S. House. With the current uprising bringing the Islamic Republic closer than it has ever been to regime change, it is certainly time for the governments of the U.S. and its allies to offer that same endorsement and to take concrete steps to support the Iranian people in what could be their final push for democracy.

By the same token, Western governments and individual policymakers should make it absolutely clear that the Iranian people, like all people’s throughout the world, have an inherent right to make that push and to rebel against tyranny and repression, especially when they have been denied the rule of law for more than four long decades.